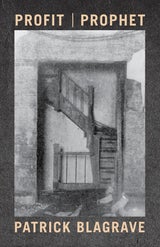 An indictment of the apocalyptically limited capitalist imagination and a heartfelt plea for something better before it's too late, Patrick Blagrave's debut collection spans from the time of John the Baptist to any number of potential endings while remaining centered on the everyday realities of life, work, and payment under late-capitalism. In sonnet sequences and in sprawling visions,  Profit | Prophet is a meditation on class and time and a rejection of the ways corporations, landlords, kings, and bosses of all kinds work to remove alternatives to the future they prescribe.

“Patrick Blagrave’s Profit | Prophet is a dyad for our times: one part grounded in the realities of contemporary American capitalism, the other a visionary dream offering another possibility. Where futures are something traded on the stock market, and workers face the scheduled humiliation of overdue rent checks and exploitation in a life that has been laid out for them, Blagrave fights against the status quo, giving voice to our struggles. While the situation is dark, Blagrave knows that as long as the cop cars burn, 'the future / could be anything, bright as sun & flames.' This book, dedicated to a future without profit, is simultaneously a damning condemnation and a gift of hope.”

"In a time when the media’s constant denial of reality floods everyone’s 'personalized' newsfeed, I find the brutal truth a relief: that’s the pleasure of Profit | Prophet  by Patrick Blagrave, a worker who is writing to you about ending work. What would happen if we stopped feeding the rich? What if we stopped ignoring all the ghosts? Blagrave depicts the struggle to think in new ways, to counter the capitalist inevitabilities that are daily sold to us, to awaken the deadened spirit. One-half sonnet reportage on the profit-ridden landscape, one-half solidarity prophecy, this book makes a whole in which poetry turns out to be for everyone, actually."

"The sonnet, as it turns out, is a good form for explaining things that are hard to explain. It makes what is clearly difficult poetic & contradictions, in which what is clearly difficult is often rooted, easier to see. It makes sense that so many sonnets have been about love. In his collection Profit | Prophet, Patrick Blagrave uses the sonnet to explain his life under capitalism as a totalizing economic & more than economic social relation. Here, he’s 'done the math' & can show you why happiness is unaffordable for so many. Sometimes the anger is palpable. Sometimes it starts to sound like love. But once you see your life from the perspective of capitalism, then what do you do? Blagrave uses the figure of the prophet, who is 'but a person / who doesn’t accept / what looks like / the future,' to keep going. What I appreciated most about the second half of Profit | Prophet is how the prophet doesn’t keep going alone. He is just one of a larger 'we' to whom it was revealed 'that we could end our worlds / & live in different ones.' It’s a humble & honest way to end the book: to say endings are possible."

Patrick Blagrave is a poet, editor, and debtor from Philadelphia. His work often explores capitalism’s cruelty and absurdity, and tries to imagine better futures without it. Some of his writing has been published in Peace, Land, and Bread, SORTES, Recenter Press Poetry Journal, Mad House Magazine, Apiary, and Bedfellows. Prolit Magazine, the literary journal he founded in 2019, publishes writing and art explicitly centered around money, work, and class. Patrick can also be found on Twitter @prosepoems or on Instagram @patrickblagrave.

100% of the author's proceeds will be donated to the Philadelphia Liberation Center's Unity & Survival Program, which has been delivering free food and supplies every week to high-risk community members in Kensington, Southwest Philly, and more since the beginning of the pandemic.